" Why you want to buy property?"

That's when it started.

If one were to google premium financing, one would notice that the examples shown are normally portraying people in their 40s. The ripe age of wanting to buy an investment property and yet may not be able to due to property prices rising too much.

In a nutshell, premium financing insurance product is borrowing money from a bank to buy an insurance product. The series of monthly cashflow from the insurance returns is used to net off the monthly loan paid to the bank.

This is akin to buying an investment property and borrowing money from a bank to buy it. The series of monthly cashflow from rental is used to net off the monthly mortgage payment to the bank.

Both require a downpayment and both are custodised with the bank.

Actually, on the surface both looks the same but actually its more similar to property investing more than 15 years ago when they allow payment of interest only and not the principal.

Now a days, property investing requires payment of both interest and principal in the monthly mortgage payments. In premium financing, one only pays the interest and not the principal. The loan amount stays the same.

Hence, using the simple formula of (annual net inflow/down payment) multiplied by 100%, rates touted by financial advisors for the premium financing insurance product can be mouth wateringly 8% - 18%pa! And comparison with property investing now can be very misleading because in property financing, the net inflow is surely smaller as the mortgage payments include paying off the principal loan!

It is also when interest rates are low that such aggressive selling of such products are pervasive.

I have summarised some information from a case study from MoneyOwl.

It was the class gathering that only the most successful was most keen to go.

First the sound of a Maserati.

Next, she walked in with a swagger, armed with a Himalaya Birkin.

The girl who consistently did the worst in class. That girl who got the lowest paying first job and now no job. That invisible girl.

She sat quietly at the corner (as usual), unbeknownst to everyone except me. The Alphas were having a field day, with their identities tied to their jobs, they unleashed a torrent of stories about their work life and which enrichment classes they have been sending their kids to.

I sat beside her and humbly asked her.

"I had nothing to lose. I whacked the UPRO ETF. I was lucky."

Comparing SPY ( another etf which mirrors the S&P500 without any leverage) to UPRO ETF, SPY sucks!

After reading up on UPRO ETF, i realized this girl has balls of steel, having experienced through one of the most volatile investing instrument.

You see, what happened between 2009 and 2011, masked by the beautiful CAGR was terrifying.

Let's compare the effect of volatility decay between the benchmark fund and the corresponding 3X leveraged fund. 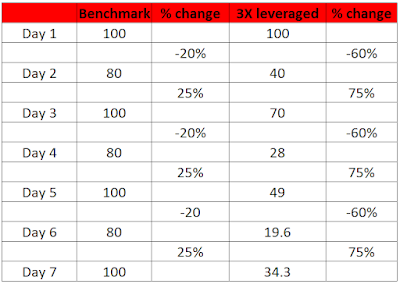 That is volatility decay in action.

This girl is pretty lucky and she knew it.

She would have lost money if in the long run :

1) The market is flat and is volatile

2) The market goes down and is volatile

3) The market goes up slowly and is volatile

It seems the S&P 500 has been going up very steadily and not very volatile for her.

I am indeed happy for her and shared my observations.

" Oh i didn't think about that, thanks, i have made enough, will be transferring to SPY. "

And handed me a hulk. "You want? No box and cert. Free"