Bio-Treat - Treating Waste? And Yourself?

And now look at this! See below for the revised Auditor notes after they released the latest Financial Statements! 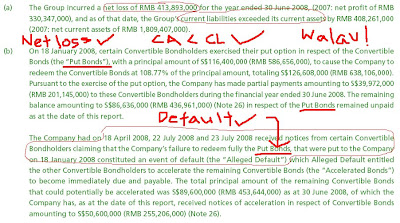 See definition of a Put Option: A put option gives the bond holder the ability to receive the principal of the bond whenever they want before maturity for whatever reason. If the bond holder feels that the prospects of the company are weakening, which could lower its ability to pay off its debts, they can simply force the issuerer to repurchase their bond through the put provision. It also could be a situation in which interest rates have risen since the bond was intially purchased, and the bond holder feels that they can get a better return now in other investments.

So has the interest rate risen or the company is weakening? ( Our pet monkey with a peabrain chooses the former.) 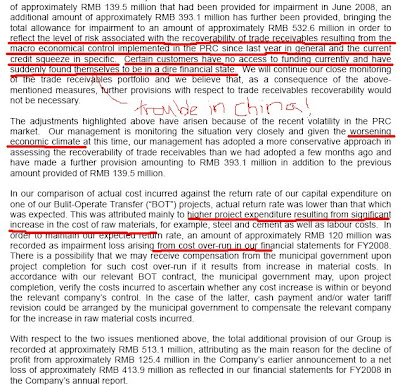 It's pretty strange that Shah Capital Management and UBS are increasing their share of this company. Take note that Shah Capital Management's philosophy is: "The two pillars of money management at SCM are investing for the intermediate to long term and a fundamental analysis towards security selection." Great, now where are the fundamentals, where is it???.....something we don't know perhaps?
Important: The objective of the articles in this blog is to set you thinking about the company before you invest your hard-earned money. Do not invest solely based on this article. Unlike House or Instituitional Analysts who have to maintain relations with corporations due to investment banking relations, generating commissions,e.t.c, SGDividends say things as it is, factually. Unlike Analyst who have to be "uptight" and "cheem", we make it simplified and cheapskate. -The Vigilante Investor, SGDividends Team


on October 20, 2008
Email ThisBlogThis!Share to TwitterShare to FacebookShare to Pinterest
Labels: FUNDAMENTALLY HMM..STOCKS