Singapore stocks are just cheaper but they are still not cheap. Here’s why..

We had a heated argument with The sexy Victoria Junior College student today because she hurt our ego.She said that after looking at our portfolio of stocks, she thinks it sucks. We, erhem, naturally felt insulted. We explained we bought most of it during the month of October. She countered with saying :” I don’t give a fiddler’s fart when you buy it. Everything has a value.” We, to prevent a further bruised ego, retorted by saying: “ Hey, you little lim kum put of a little girl, who has been monitoring the stock market while you are studying for your A levels. Just look how much prices have corrected! You little prick.” She shouted:” You are just like a cow and anchoring yourself to last years prices!” . With that, she left in a huff! Our egos now badly bruised. We thought we felt a tear on our cheek. And then we realized, we are cows. She is right.

In behaviourial finance, one of the fallacies of investors is to suffer from an anchoring effect. The concept of anchoring draws on the tendency to attach or "anchor" our thoughts to a reference point - even though it may have no logical relevance to the decision at hand. For example, some investors invest in the stocks of companies that have fallen considerably in a very short amount of time. In this case, the investor is anchoring on a recent "high" that the stock has achieved and consequently believes that the drop in price provides an opportunity to buy the stock at a discount. See below of an experiment. Taken from a University Research paper:

Quote
In a 1974 paper entitled "Judgment Under Uncertainty: Heuristics And Biases", Kahneman and Tversky conducted a study in which a wheel containing the numbers 1 though 100 was spun. Then, subjects were asked whether the percentage of U.N. membership accounted for by African countries was higher or lower than the number on the wheel. Afterward, the subjects were asked to give an actual estimate. Tversky and Kahneman found that the seemingly random anchoring value of the number on which the wheel landed had a pronounced effect on the answer that the subjects gave. For example, when the wheel landed on 10, the average estimate given by the subjects was 25%, whereas when the wheel landed on 60, the average estimate was 45%. As you can see, the random number had an anchoring effect on the subjects' responses, pulling their estimates closer to the number they were just shown - even though the number had absolutely no correlation at all to the question. UnQuote

In order to best avoid the anchoring effect, one has to use a calculator and determine a value. We decided to use Benjamin Graham's formula to determine that value. This value will then serve as a benchmark from which we anchor our investing decisions. We apologised to The SEXY Victoria Junior College student and bought her a Macdonalds Happy Meal with a Madagascar Giraffe ( Moooov it). She also made us sing the Victorian Anthem and she said we have to put the Victorian badge on our site. ( Whats with her and Victoria???????!!!) She was so happy that she volunteered to help us crunch some numbers. This is shown below. So you see my friend, stocks are just cheaper. They are still not cheap! ( We are not saying the market has not seen the lowest yet. Don't mistake us cos we don't know. We are just saying cheapness based on Benjamin's valuation. See our post on How to Value Equities using Benjamin Graham's Simple Formula.) 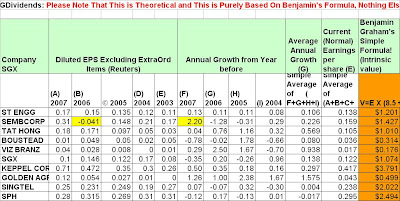 (We want to add that above is not our portfolio. We have positions in some of them though. So pls pls use a calculator, go to reuters or bloomberg and deduce the value for yourself. A the VJC student said " Don't be a Cow". )