No investment has been done since the beginning of 2010 till today 7 September 2010. Stocks, especially blue chips ones, have been running up like crazy. We missed an opportunity last week to load some more Singpost due to trying to gain a 0.01 cent advantage...damn it! See how far it rose from $1.13 to $1.23 within 1 week!!!Arrgh. I spotted the aggressive quantity of share buybacks of Singpost, whenever it touches $1.12 or $1.13 and therefore entered with CONVICTION but missed just cos i queued at $1.12."%%$#*@&@^!%@#$@%@". But its alright..hehe..another one will come as always and i have vested in it last year, so nothing to complain. Just for your information on the performance of Singpost, up up and away!

Having about 90% of my portfolio vested in blue chip stocks during the crisis,the valuation of such stocks are not very attractive, having reached near their 52 week highs and price exceeding their net asset valuation by quite a bit. Europe and US seems to be sputtering along and the asian region seems to be doing better. In very general terms, the economy is on a better footing than before though risks still remain but the probability of going back to the crisis again is low. (We are still keeping some opportunity cash just in case). Investing in companies that are focused on the asian region seems like a logical choice now. Given this backdrop, we have started to look at small cap to medium cap stocks whose revenue is predominantly derived from asia.Honestly, we find it a challenge to research and source out for the perfect small-medium(SM) cap stock. Unlike the blue chips ones,for SM ones, there will always be an aspect to it that is an eyesore like everything will be good about it, but they are giving out too much rights or everything about it will be good but directors have bought it cheaply at low price before, so buying it at a higher price feels damn sian to me. Nevertheless, i bought into Tai Sin today having considered the pros and cons.

We like it that they are giving out dividends consistently every year. This shows that they are shareholder oriented. This is bloody important. This stock can be a capital growth stock, and dividends along the way just makes the wait for the capital growth more bearable. At current price, dividend yield is approximately 7.5%. According to their latest financial statements, there is one upcoming dividend ($0.01)as it has been recommended by the board, but yet to be reflected on SGX website as of now. 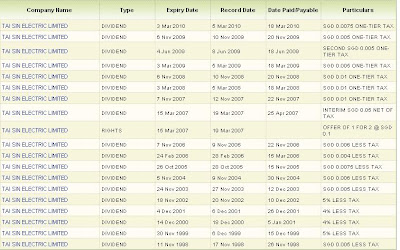 We like that their directors are buying at $0.225.Go to Tai Sin insider trades. If you look further back through the months, some of their directors have paid prices ranging from $0.34 to $0.15. See for yourself. The interesting part is that some of the shares were given as a gift for a daughter's wedding from the parents and uncles. This further point to the likelihood of focus on shareholder value. Come on, will you give your close kin shares which wont add value. Possible, but unlikely.

We like it that they are pretty near their 52 week low. See for yourself....you unbelieving soul!

On a final note, go look at theprojects they have done in the past, from circle line mrt, marina barrage, bedok water reclaimation plant, sentosa development project, changi airport....Remember the national day rally about the $60 billion upgrading rail lines government project announced by PM.....hmm maybe,maybe, only time will tell. As an endnote,this stock is still not perfect.........Do your research yourself!

on September 07, 2010
Email ThisBlogThis!Share to TwitterShare to FacebookShare to Pinterest
Labels: Tai Sin