Improper Disclosure for Minibonds? How about Fund Managers?

As we approach the end of the year, some people are speculating that certain counters will be 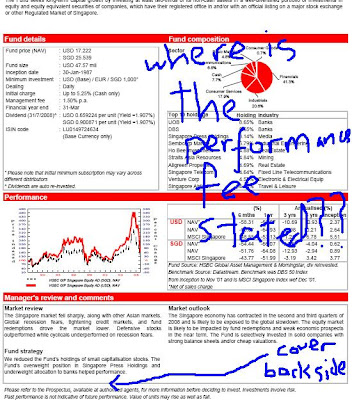 rallying due to "Window Dressing" by Fund Managers. In case you are "sotong" about the term window dressing, it refers to the oft-said practice of fund managers buying stocks that have been performing well and discarding stocks that have been performing like shit just before they have to report their holdings in a prospectus or interim reports to unitholders. This is to make their holdings look good to people. (Wayang).

But SGDividends, as usual, don't give a fiddler's fart on what people say until we can prove it. But sad to say, we failed. Its nearly impossible to prove this due to either the lack of disclosure of their holdings and the lack of disclosure on the date they purchase their holdings...So well.
Anyway, we think the fund management industry has a lot to improve in terms of disclosure. If not for our curiousity in poring through their prospectus ( originally for the "window dressing" project), we would not have known that they are paid a performance fee on top of their management fee. Why can't these funds state that they also DO CHARGE performance fee in their well marketed FACT SHEET!See so much white space above in the box titled Fund Details? See below for the performance fee they charge in their financial statements. 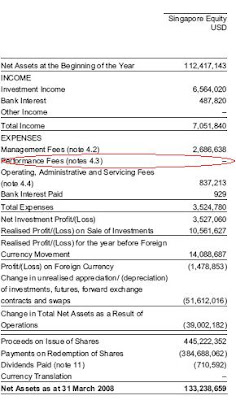 Anyway, could the rally in the Month of March this year 2008 be due to "Window Dressing"? 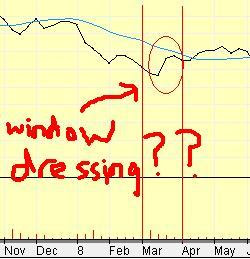 Important: The objective of the articles in this blog is to set you thinking about the company before you invest your hard-earned money. Do not invest solely based on this article. Unlike House or Instituitional Analysts who have to maintain relations with corporations due to investment banking relations, generating commissions,e.t.c, SGDividends say things as it is, factually. Unlike Analyst who have to be "uptight" and "cheem", we make it simplified and cheapskate. -The Vigilante Investor, SGDividends Team
on December 02, 2008
Email ThisBlogThis!Share to TwitterShare to FacebookShare to Pinterest
Labels: Improper Disclosure for Minibonds? How about Fund Managers?