People Quarrel Over Coffee...Don't drink Coffee with Friends or Loved Ones 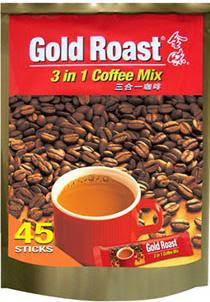 We were shopping with Barber for groceries and was at the coffee beverage section of Giant. A couple was quarreling over which brand of coffee was better Super 3 in 1 Instant Coffeemix or Gold Roast 3 in 1 Coffeemix. They were at it for 10 minutes while, we, the ever kaypoh and bo liao people, pretended to be looking at some Lee Kum Kee Oyster Sauce, but we were eavesdropping on the couple's war of words. They finally chose Super..the guy's favourite. The girl seemed to walk off in a huff. Tsk Tsk, such an ungentlemanly guy.....come on..its just coffee dude.

So just what is so special about coffee that can cause couples to quarrel? Our curiosity was

aroused and we decided to buy both and give it a try. ( Barber, you still owe us 20 cents, dont forget to return...this is not OCBC smartchange ok..)

We tasted both and Barber liked the Super but we liked the Gold Roast. And then it happened again, another quarrel. But since Barber was a beefy person, we decided not to make him too angry by arguing too much. We decided on a fair way of winning this argument, to look at the financial statements of the companies of these 2 brands Viz Branz ( Gold Roast) and Super Coffeemix( Super). 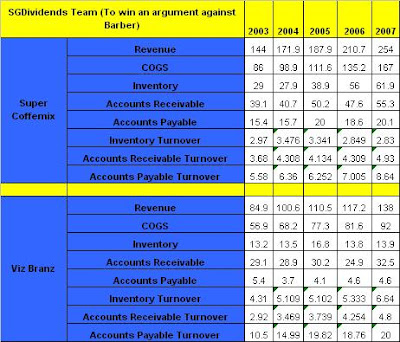 We reasoned with Barber that the Inventory Turnover ( COGS/Average Inventory) of Viz Branz was consistently higher and getting higher, than Super Coffeemix. (See below first chart, purple for Viz, blue of Super)This implied that Viz Branz's products were flying faster off the shelf than Super, which meant it is most likely more well-liked. Barber could not reply, but only mumbled something under his bad breath. And that's how we ended the quarrel with Barber. [ It could mean that Viz Branz is managing its inventory better too by using a Just-in-time policy but this the barber don't know...hehe. Anyway, its a metric that signifies good management.]

Since we were looking at these 2 companies, we decided to look at some other ratios just out of curiosity again ( since it is so simple to do, so why not?), and it had nothing to do with which coffee tasted better.

We decided to look at how strong the company is, in relation to its customers. We looked at the Accounts Receivable Turnover Ratio(Revenue/Average Accounts Receivable) to see which company was taking a longer time to collect their money from customers. A higher ratio implies its collecting money faster which is good. (See above second chart) Viz Branz started out pretty worse off than Super Coffeemix but is catching up and is nearly as good as Super in 2007...a good sign of improving management ability.

Next, we decided to look at how strong the company is, in relation to its suppliers. We looked at Accounts Payable Turnover Ratio ( COGS/Average Accounts Payable) to see which company had better purchasing terms from its suppliers. A lower ratio means a company can take a longer time to pay off its bills to the suppliers.( See above third chart) Super Coffeemix seems better in this metric and seem to be in a stronger buying power or having better supplier relations compared with Viz Branz.

So who is better? Super Coffee Mix or Gold Roast. You decide!

Important: The objective of the articles in this blog is to set you thinking about the company before you invest your hard-earned money. Do not invest solely based on this article. Unlike House or Instituitional Analysts who have to maintain relations with corporations due to investment banking relations, generating commissions,e.t.c, SGDividends say things as it is, factually. Unlike Analyst who have to be "uptight" and "cheem", we make it simplified and cheapskate. -The Vigilante Investor, SGDividends Team
on December 01, 2008
Email ThisBlogThis!Share to TwitterShare to FacebookShare to Pinterest
Labels: People Quarrel Over Coffee...Don't drink Coffee with Friends or Loved Ones