Is Macquarie International Infrastructure Fund a good buy for the Beefy Barber?

Whenever the Beefy Barber wants us to help him, we notice his biceps start bulging slightly. Barber wanted to know if Macquarie Infrastructure is a good buy as the price has dropped from an all time high of $1.23 to $0.295. He also mentioned about the very high dividends yield of about 24.5% (based on dividends of 7.25cents on market price of $0.295). But he is confused, he says. Lately, instituitions such as Capital Group has been reducing their stake from 7.0159 % To 6.9547 % . Macquarie has been reducing from 11.08 % To 10.71 %. BUT Directors such as Lee Suet Fern and Heng Chiang Meng are buying up shares. So what's up? We decided to go together to the Macquarie Seminar on 4 Dec 2008 to learn more. Frankly, we came out non the wiser. What was mentioned is exactly what has been announced on the SGX website and we won't elaborate more. We remembered only the speaker saying that the Catalyst of the plunge was due to Hedge funds who dumped around 10% late last year and Lehman's collaspe and something of a conservative estimate that the dividends will be expected to be 6 cents next year ( 20.3% dividend yield) and that once corporate debt has been repaid, MIIF will start to increase dividends again and that there is going to be a change of depreciation method from a straight line method to a units of production method for Hua Nan Expressway. Hiyah...don't understand the Australian Dudes slang!!! 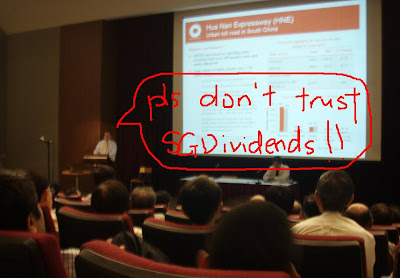 Anyway, as the Barber was more interested in the dividends, which is the meat of this investment, we decided to compile a chart, showing the Distributions of each of the underlying compared with the risk ( gearing) of each of this business. We reasoned that this would be helpful to Barber as any collaspe of any one of the businesses will mean no distributions from that business and therefore a reduction in dividends. Please note that the distributions used above in the chart is based on operational dividends, excluding special, one -off ones. As can be seen from the diagram above, if Miao Li or Hua Nan were to collaspe, since their distribution contribution is so minute there should not be a material impact to the dividends received. (assuming fees and charges remain the same),especially Miao Li with the highest gearing.CAC and MEIF is quite risky and their distributions to MIIF is quite substantial.
We wanted to compare with what an appropriate infrastructure gearing is. And found this article.
Quote Gearing is higher for unlisted than listed infrastructure. One of the advantages of unlisted infrastructure is an owner’s control of the capital structure. Hence, gearing levels in privately held infrastructure range from 50% at the lower end, for higher risk infrastructure such as airports, to 90% for social infrastructure (schools, hospitals, etc) for which the revenue stream is typically backed by government or semi-government payments. On average, gearing for listed infrastructure companies is around 40%. However, it varies significantly across companies and across regions. For example, gearing for some of the Australian listed funds is quite high (above 50%) while the European infrastructure companies have a low level of gearing (around 30%). Unquote

Since MIIF underlying businesses are unlisted and the consolidated average gearing is roughly 60% and its within the gearing range of unlisted infrastructure as stated in the article above ( 50% - 90%), no glaring problem seen.
We have not heard from Barber since we left the seminar whether he would still want to invest in it. He owes us each an "ARMANI" haircut for accompanying him to this seminar.
Important: The objective of the articles in this blog is to set you thinking about the company before you invest your hard-earned money. Do not invest solely based on this article. Unlike House or Instituitional Analysts who have to maintain relations with corporations due to investment banking relations, generating commissions,e.t.c, SGDividends say things as it is, factually. Unlike Analyst who have to be "uptight" and "cheem", we make it simplified and cheapskate. -The Vigilante Investor, SGDividends Team
on December 05, 2008
Email ThisBlogThis!Share to TwitterShare to FacebookShare to Pinterest
Labels: Macquarie Seminar - Distributions VS Risk