data today. Shit man. Some of our investments SUCK after seeing what she crunched. Anyway, what emerged is so simple to understand but its just that we have been too absorbed into the world of sexy valuation names, such as Sum of Total Parts (SOTP) valuation, Cash Conversion cycle, DCF, PEG ratio e.t.c. . Not that they are useless of cos. What we think and reasoned is that before these ratios are used, the utmost prerequisite is that the investment has to be generating a positive operational cash flow consistently first before one
should even consider analysing further with other ratios. ( Unless of course if they are a new company without operating history, then its your call).
"Profits are an opinion, cash is a fact " - Unknown
Just imagine this, a company reports a darn large sales revenue. But this sales revenue may be

"owed" by the customers to be paid say in 6 months time. What if the customers default? This sales revenue is then not realised but still recorded as net income previously. Similarly, net income is often contaminated with depreciation expense which is non-cash but purely an accounting concept. So if a company is generating a boatload of cash but if it is capital intensive, then net income will be seen as very little. To clear all this fluff, including management's easy manipulation of net income, one has therefore to look at the Cash from Operations. Or to be more conservative, Free Cash Flow from Operations from a reasonable amount of time period, say 4-5 years or more.( Deducting Capital Exp. from Cash from Operations.)

So, we decided to look at Singapore Press Holdings. Recently, 2 analysts have been stating a BUY call for this counter, including a consensus recommendation calling for a near buy. Its easy to agree with them. Straits Times Newspaper, Business Times everywhere and they should be recession proof, right. Let's look at their data. ( You can find the data at http://www.reuters.com/) 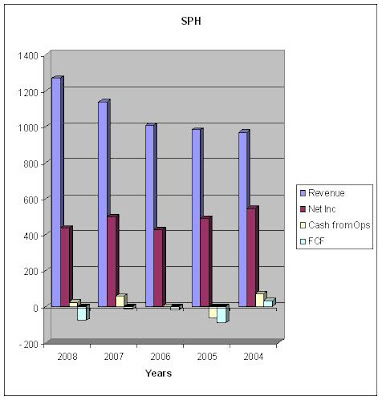 Wondering why their revenue have been increasing so remarkably but their net income seem to be going no-where, and their Cash from Operations is bobbing up and down the water. Their FCF seem to have the longest breath, staying submerged, only coming up for some fresh air in year 2004. Come to think of it. Does SPH really have an investment moat? It's great they came up with STOMP , Digital Newspaper ...but...is that enough?
The following is added on 9 Dec 2008 . This is from Today Newspaper published on 9 Dec 2008, a day after we published this post. Pls note that we are definitely not related to MediaCorp ( come on, just look at the quality of editing of this cheapskate blog) and their recent spat with SPH on whose readership is higher. 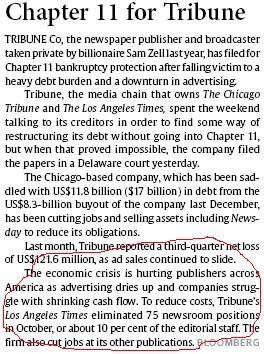 ucypmas, a reader, commented that their "Free Cash Flow" might be understated due to the large amount of dividends paid out by SPH. So we decided to relook at it. Yup....they shuld actually have a large free cash flow but due to the paying out of boatloads to investors, its lesser than it seems. It ain't that bad after all. So it must really be in a kinda stable industry where SPH chooses to give out cash instead of using it for investments! Thanks ucypmas for highlighting this fact.

Updated on 10 Dec 2008: We thought it was quite unfair to SPH and irresponsible for us not to show accurately the free cash flow of SPH. So below is the adjusted data where we added back the Dividends paid out to Investors to the Cash Flow From Ops and Free Cash Flow . (Anyway, wah lau, how come SPH placed Dividends paid out to shareholders under the Cash Flow of Operations section??? Shouldn't it be itemized under Cash Flow of Financing section like what usually companies do??? Bleah!) 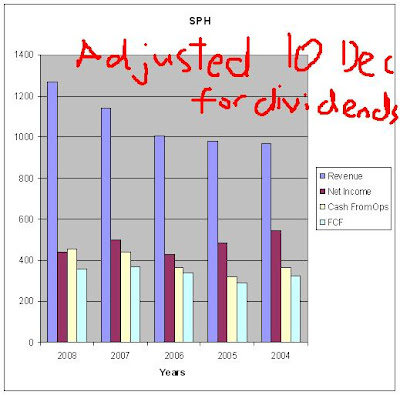 on December 08, 2008
Email ThisBlogThis!Share to TwitterShare to FacebookShare to Pinterest
Labels: Singapore Press Holdings - A recession proof play but is my money better utilised elsewhere?