Fundamental Analysis is Useless without Integrity

'Somebody once said that in looking for people to hire, you look for three qualities: integrity, intelligence, and energy. And if they don't have the first, the other two will kill you. You think about it; it's true. If you hire somebody without the first, you really want them to be dumb and lazy., -Warren Buffett 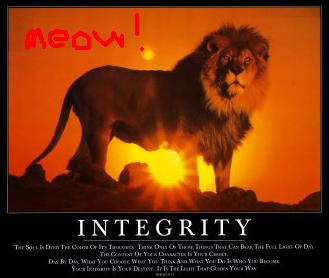 One thing good about this crisis is that it gives people a chance to learn things. Having received that mass circulated email as published in the previous article, we just decided to take a look at a randomly chosen certain textile S- share company that has its shares suspended lately. Below is a snippet of announcement issued by the company on 13 March 2009 where it states that Fibrechem is in default of a loan of US$26,365,581 to a consortuim of local and international banks. So who are these banks?

See below for a snippet of the annoucement made on 22 Aug 2006 by Fibrechem.

What really amazes us is that there was little or no clue based on publicly available information that could have led to somebody predicting this could have happened. By looking at their financial statements, both audited and non-audited that were released, leading up to this default, it seemed that this company was flush with cash and settling bank loans were a non-issue.

See below for the financial statements leading up to the event.

The Cash and Cash Equivalent is enough to pay more than twice the bank loans owed!! 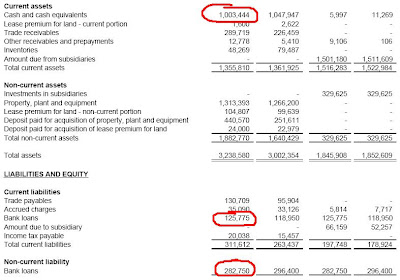 The Cash and Cash Equivalents are again more than enough to cover 2 times the Bank loan! 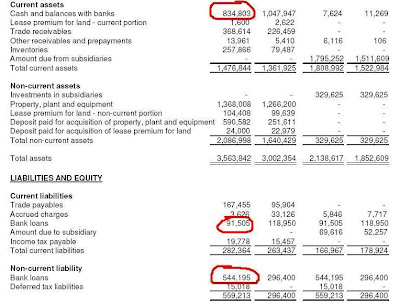 Ok maybe now the Cash and cash equivalent is not able to pay twice the bank loan...but it still looks pretty decent. (Maybe the astute analyst might notice the sudden decline in excess cash over bank loan due to the huge jump in non current bank loan and question it..but we don't think we would have noticed it ....heng ah..luckily never look at this counter.) 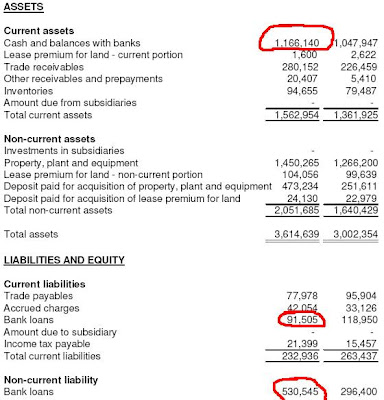 The Cash and Cash Equivalent is nearly twice the bank loan...a huge jump in cash and cash equivalent amount this time.

Where did this cash go? Is it real in the first place? Which bank did Fibrechem stash this cash in? Did the big four auditor verify this cash in year 2007? What is going on!...This proves that fundamental analysis is useless if given rubbish data. Warren Buffet is right...Integrity of management is the most important! All else is secondary. S shares can go eat shit.

on April 26, 2009
Email ThisBlogThis!Share to TwitterShare to FacebookShare to Pinterest
Labels: Fundamental Analysis is Useless without Integrity, Warren Buffet Letters