"Should i sell my perpetuals (BTWZ) or preference shares(N2H) of Hyflux?" asked a concerned HNW individual.

" I don't know..it is complicated."I said. "Don't ask a church mouse".
But that got me thinking.

There is no denying that Hyflux is super leveraged and it is issuing debt to repay old ones.

In May 2016,the issuance of $500 million perpetual securities (BTWZ) was done at a good time for the company because the closest comparison , Hyflux Preference shares (N2H) has been trading consistently above par of $100 since its issue, even reaching $105 at one point ( current yield of 5.7+pa).This gave the company an opportunity to issue a 6% coupon for BTWZ.

Coupled with the very low interest environment then, there were many investors willing to take the risk. 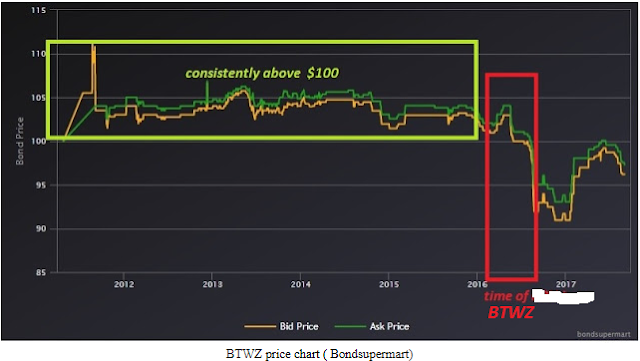 Most people  speculate that the company will redeem N2H on 25 April 2018 to avoid the step-up coupon of 8% pa. But, i am wondering, how is Hyflux going to pay back?

They have stated they intent to divest partially Tuaspring and fully divest Tianjin Dagang.

But, who are going to buy them as these are customised projects and  transactions are subject to regulatory approvals? Besides, Tuaspring has been making losses so the eventual sale price might be lower.

Currently, investor sentiment is different. Investors are going to again look at the closest comparison BTWZ on 25 April 2018 . Sadly, it has been trading consistently below Par since late July 2016. Therefore, i think Hyflux will have to issue another perp with a coupon greater than 6%pa to pay back N2H ( or sweetening things up with a shorter maturity ) especially since the yield for BTWZ has been hovering above 6%, having even reached to a high of about 6.8+% in dec 2016.
No thanks to the O&G related bond defaults and the higher likelihood of interest rate rises.
3) Don't redeem the N2H

This is a likely possibility too. Not having to reissue a new tranche could save Hyflux the issuance expenses. The issuance expenses was SGD 5.2 million ( 1.04% of $500 million for BTWZ) and given the likelihood that the coupon for the new issuance will be higher than 6% pa, there is not much advantages to redeeming N2H.
However, i think this will shed a negative light on Hyflux as there are expectations that they will redeem.

Hopefully they are able to divest their assets for sale. Not redeeming N2H is the worst outcome among the 3. Their ability to easily sell their debt to the retail market is due to their brand and their history of repaying in full their debts. Without this ability, their leveraged business model is dead.

As with Keppel, Sembcorp, Swiber whose fortunes are so intertwined with the oil price, who is to know that Hyflux ( a water company) is also a victim as their supposedly big customers in MENA are cutting back on their infrastructure budgets.

A saving grace is that their customers are 98% municipals (63% Singapore government related entities) so the risk of them reneging on contracts is low. Hyflux has also been giving out dividends to her common shareholders albeit decreasing in amount. I guess its not a simple thing as to suddenly stop completely  the payouts as this will surely have ramifications on their share price and indirectly, their ability to find sources of funds. Selling equity seems like a remote possibility given the state of the share price.

The issue is rather on cash flow liquidity, regulatory risk( divesting) and project execution.
Hope Hyflux can think of something BIG out of the box. ( ELO seems insignificant, at most a distraction)
on September 03, 2017
Email ThisBlogThis!Share to TwitterShare to FacebookShare to Pinterest
Labels: hyflux