" My October electricity bill was 3 times the August one! I'm getting out of it!"
There were many feedback among friends and people in forums who were under the SP Wholesale plan that they were facing astronomical bills and a rush to get out of the wholesale plan.
This feedback was timely as my Geneco plan is expiring on Feb/March 2022 next year and i have been penning down my thoughts as a way to reflect on the decision on whether to join the 1% of consumers on the wholesale plan.
SP Wholesale Plan - Going for it! - 10 November
Which electricity plan to choose - 31 October
I would have to probably reconsider switching to the SP Wholesale Plan given how the prices played out in October.
I have been tracking the average SP wholesale electricity plan against both the SP regulated tariff and electricity retailer since Jan 2020 on this page. 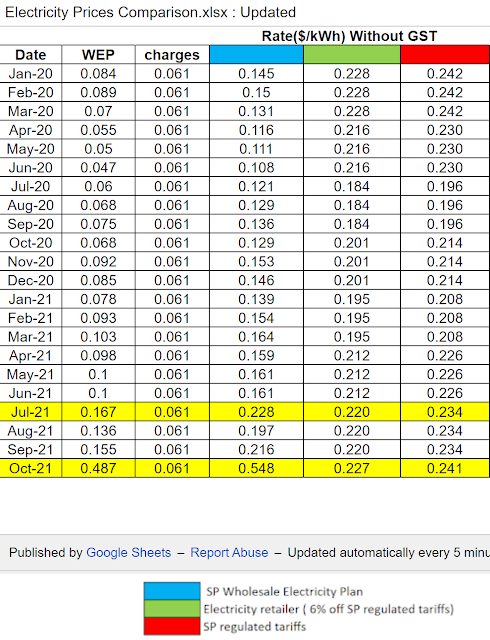 October 2021 is indeed the ONLY month where the SP electricity plan exceeded the SP regulated tariffs and not only by a small margin but more than twice!
Looking at the charts in October 2021, on an average basis, only if one used electricity from 1 am to 6 am in October will one have an  electricity rate lower than the Wholesale electricity rate.
Hopefully, the situation will be clearer near contract expiry!
on November 25, 2021 No comments:
Email ThisBlogThis!Share to TwitterShare to FacebookShare to Pinterest

Alibaba recently released their results which apparently disappointed the market and caused an immediate plunge of 10%.

I am sure by now that everyone knows the market is irrational and no one can forecast what the price can be in 1 months , 3 months or even 1 year's time.

Even the guru's or big boys' actions are conflicting.

If one were to read all the opinions in forums, one would be seriously confused.

Now, Alibaba has a share price of around US$140 again.

But Alibaba is a much more valuable company now than it was in 2017, at least 3 times. Theoretically, its share price should be at least 3 times of US$140 in 2017 making it US$420 today if we were to go along this line of logic. Of course, one can look at it in another way and say that since the current price is US$140, the price in 2017 should have been US$47 and US$140 was too overvalued in 2017. This is perfectly reasonable too.

I think what is happening now is just investor sentiment based on the regulatory clampdowns and also the market focus on the slower growth which based on maths, the larger a company is, the base is larger hence the growth has to slow also.

I am of the opinion that once the regulatory situation dies down, Alibaba share price should do better.

In 2017, there was Xi Jinping. In 2021 Xi Jinping is still the president, just that now, people know what he can and will do and it is more clear.

An optimist can say with so much regulations compressed into these past 6 months, the only way is lesser regulations going forward.

Besides, Alibaba isn't a dinosaur company with no growth catalyst. Last i checked, it has two growth engines which is international  ecommerce and cloud computing.

So many arguments for and against.

One's head can really spin if we can't think for ourselves.